Robert Anthony Strickland knew around the age of 10 years old that he wanted to become a lawyer after receiving some encouraging words from his Aunt. Through his grade school years, he excelled at sports and mastered the curriculum. In high school he became the President of a leadership organization that permitted him to leave school early to work at the State Attorney’s Office in Green Cove Springs. While working at the State Attorney’s Office, Robert became involved in Teen Court as a Teen Attorney, where he defended and prosecuted many teen offenders, and ultimately earned the Jim Thies Award and newspaper publishing for his exceptional litigation skills. Robert’s hunger to be the best was instilled in him by his mother, who always believed in her children and stood by them proudly because she wanted them to enjoy their lives and care about the work they did. To overcome adversity, he had to fight many battles, and he will always fight for his goals in life. However, there was one time that he was cut on the first day of tryouts for the University of North Florida’s(UNF) basketball team because he was not in shape, but he graduated from UNF with a GPA above a 3.0, so failure is relative. He then went on to obtain his law degree from St. Thomas University School of Law in Miami, Florida. At St. Thomas Robert was the President of the Black Law Students Association, Awarded Most Involved 1L, Dean’s List 2012, Student Coach of the Southern Regional Winning Moot Court Team, Member of Phi Alpha Delta Law Fraternity International, Member of Caribbean Bar Association and many other organizations, and Moderator for Honorable Peter T. Faye Inn of Court. Throughout his career, Robert worked for many insurance companies, and some of the biggest law firms in the State of Florida. Robert opened his own practice in December 2015. Robert cares about the needs of each one of his clients and he makes a promise to represent the interest of his clients zealously. Robert enjoys spending time with his family, completing home projects, and riding motorcycles as a hobby. 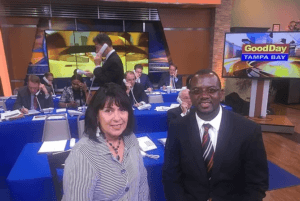